Skip to content
HomePostsHuman rightsAhmed: Every door is closed to me 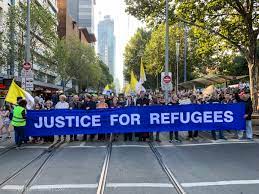 No work rights, no study rights, no access to Medicare – this is the plight of asylum seekers denied access to bridging visas for years and years.

It was brought to light on the ABC this evening and featured Shaun Hanns, Democrats Human Rights campaigner who previously worked for the Department of Immigration.

Shaun Hanns worked at the Department of Home Affairs as a Protection Obligations Decision Maker between 2013 and 2018. The job involved interviewing asylum seekers to determine the validity of their claims for protection in Australia.

“The way it was described to me was: If a person was on a ‘negative pathway’ then it would be less likely their bridging visa would be renewed,” he said.

“The response that they gave to me then was, ‘We don’t want to give them the wrong impression by renewing the bridging visa’.”

Since leaving the Department of Home Affairs, Mr Hanns has become a refugee advocate and recently worked with advocacy group Liberty Victoria to raise awareness of this issue.

He says without reform to this area of the country’s immigration processes, Australia’s situation could start to replicate America’s.

“You see in the US there’s a lot of discourse about dreamers versus illegal aliens,” he said.

“In Australia from 2030, there’s a rissk that we’ll have that exact same kind of problem.”