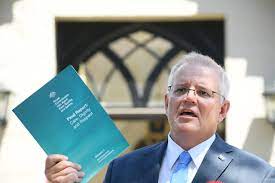 In the opening ceremony of COP26 UN Secretary-General, Antonio Guterres called on world leaders to escalate climate action saying the world’s nations are “digging our own graves”.

The UN Emissions Gap Report shows that even if all countries meet their national targets to slow down emissions, the global average temperature is projected to rise 2.7 degrees Celsius by the end of this century compared with preindustrial times. That would put the world on a path to more intense heat, fires and flooding.

Meanwhile the Prime Minister is flailing about in Glasgow announcing $500 million in ‘international climate finance’ and talking up what he calls our over-achievements in emissions reduction. It’s dishonest and embarrassing.

….optimistic assessments of progress on tackling the climate crisis were “an illusion”.

Malcolm Turnbull was blunt this morning on Radio National

The proposition that seems to be fashionable in some quarters here that we can keep on burning coal, and in indeed exporting coal, and that somehow is consistent with getting to net zero by 2050, is nonsense. The reality is if we keep burning fossil fuels we will fry the planet.

So too, Queen Elizabeth who said the time for action was now.

I, for one, hope that this conference will be one of those rare occasions where everyone will have the chance to rise above the politics of the moment, and achieve true statesmanship.

Statesmanship is not what we are hearing from our PM. Citing the global response to Covid as the way climate will be dealt with (we hope not in the case of Australia’s vaccine roll-out, quarantine or the gas-led recovery). He said the challenge of net-zero by 2050 will be met largely by those who are not in this room.

At least that much is true…