Skip to content
HomePostsFirst nationsJuukan – a defining story of our nation? 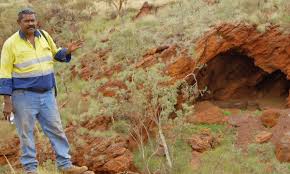 The blasting of Juukan Gorge alerted Australians to the scant regard mining company Rio Tinto had for the traditional owners of the land – the Puutu Kunti Kurrama Pinikura. They lost their material connection to sacred sites of ceremonial, clan and family life, the basis for their political and social organisation, writes History Professor, Clare Wright of Latrobe University in The Conversation.

Rio Tinto lawfully gained access to high-grade iron ore worth $135 million and nothing has been done to prevent such destruction from happening again.

Professor Wright reminds us that this is just the latest in a very long history of European people displacing traditional owners to get at the wealth in the ground. The gold rush in Ballarat, 1851-61, not only dug up vast areas of what we now call the goldfields, it brought 600,000 immigrants to the area. On first contact, there were 3,240 members of the 25 Wathawurrung language groups in the Ballarat region. By 1861, just 255 Aboriginal people remained.

What’s much less known about is the fact that Indigenous people across the country practiced sophisticated mining and traded the extracted resources. It has suited us to be ignorant about so many sophisticated Indigenous endeavours such as farming that produced vast crops of grain and the complex fish and eel trapping systems at Brewarrina and Budj Bim. There again, this is hardly surprising given the tens of thousands of years of continuous occupation of this land.

It’s a confronting but defining part of our history and more reason for us to insist that traditional owners should determine what happens to that which remains of their land.

It’s a must read.