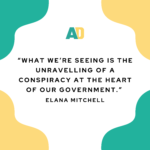 The revelations that Scott Morrison had himself appointed as minister to five other portfolios without telling the incumbent ministers or the Australian public, and the ramifications of this trashing of convention on our democracy continues to unfold. Join Elana and Steve as they pull apart this whole gobsmacking saga.

For the uber nerds, here’s the Solicitor General’s advice to Prime Minister Albanese

Michael Pascoe, Paul Bongiorno and Crikey on the Governor General

Karen Middleton at the Saturday Paper

Ronni Salt at The Shot

John Birmingham at his column Alien Side Boob

Jenny Hocking at The Guardian

Jack Waterford at Pearls and Irritations

Anthony Klan at the Klaxon

And if you want to know more about the 1975 constitutional crisis and the dismissal of the Whitlam government, the ABC has an outstanding podcast on this called The Eleventh.