17. The King of Australia 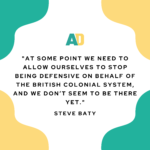 Keep the Bastards Honest
17. The King of Australia

The Queen is dead.  Long live the King of Australia.

It felt like the world came to a stop for a number of days with the passing of her majesty Queen Elizabeth the Second, and the ascension of her son Charles from Prince of Wales to King Charles the Third.  In Australia it felt like the passing of the Queen revealed a number of faultlines, not just in our society or our politics, but in how we see ourselves as a nation, and the history that we haven’t begun to reckon with.

Join national vice presidents Elana Mitchell and Steve Baty as they discuss the passing of one sovereign and the ascension of another, and what it means for Australia to become a republic.

Rachel Withers asking what the point of the Australian Republic Movement (ARM) is, as they suspend their campaign in the wake of Queen Elizabeth’s death, in The Politics.

Osman Faruqi’s article on the ARM, and the need for younger, more diverse leadership on the issue of a republic in the SMH.

The news of Peter Fitzsimons stepping down as chair of the ARM broke after recording.

Tim Dunlop remarking on the response to the Queen’s death, and then drilling down into what that response actually entails.

Jonathan Green also touches on the politics of monarchy in The Politics.