2. Is Christian Porter Taking our Democracy off a Cliff?

HomePodcast#ChristianPorter, #KeepTheBastardsHonest2. Is Christian Porter Taking our Democracy off a Cliff? 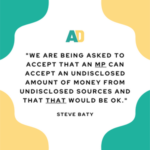 Keep the Bastards Honest
2. Is Christian Porter Taking our Democracy off a Cliff?

Former Attorney General Christian Porter has somehow managed to weather being accused of an historical rape (which he vehemently denies), suing the ABC for defamation and then settling the case without requiring the ABC to accept responsibility or apologise, and has now resigned his cabinet position because he accepted an anonymous donation from a blind trust to pay his presumably hefty legal bills, rather than reveal his donors or how much was donated to him.

Join Elana Mitchell and Steve Baty as they pull apart the latest jaw dropping antics of one of the most corrupt and incompetent governments in Australia’s history, and discuss how allowing a sitting MP to keep an anonymous donation threatens the very foundations of a fair and free democracy.

Elisa Resce for the Australian Democrats “What is a Bastard?”

Do your bit for democracy and join us