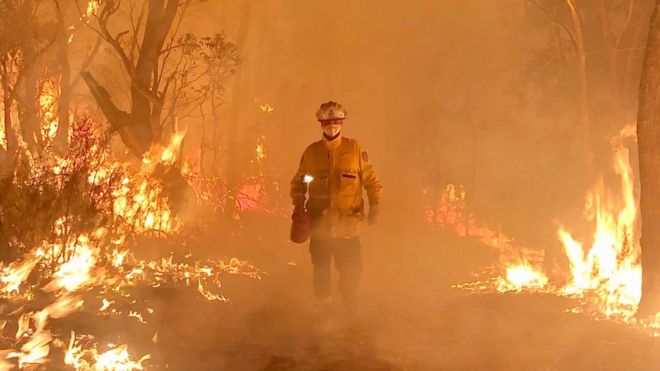 Australia’s volunteer firefighting force has done a mighty job of keeping people and property safe but catastrophic fires will likely be with us for another two months.

Is it fair to expect volunteers to continue to carry this immense and dangerous responsibility, unpaid and exhausted?

The trend is for more long, hot and dry summers and the peak this year is yet to come. Doesn’t this suggest the need for an emergencies plan that acknowledges the reality of climate change?

Climate change poses a bigger threat to Australian lives, livelihoods and environments than anything else on the horizon so why not engage defence forces?

The Prime Minister, who says he ‘won’t be panicked’ into stronger commitments on emissions reductions and won’t meet with fire chiefs calling for a summit, is not helping.

We are with the firefighters on a summit.

….. the aim was to come up with a national, multifaceted plan to look at fuel management, firefighting capabilities including aircraft, building standards, how communities are planned, refuges, emergency warnings and how to use military assets in a less ad hoc manner.

They would look at issues such as how farmers manage land, their burning practices and how they can keep stock and equipment safe.

“There’s just so much to be done and there’s just no leadership coming from Canberra to even think about it,” Mr Mullins said. (news.com.au 17/12/2019)