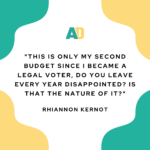 Young Democrat Rhiannon Kernot joins us to conduct an autopsy on the final budget of the 46th Parliament of Australia. It’s a budget that’s political, short term, and not really coherent because it’s a cynical vote buying exercise, but Rhiannon, Steve and Elana try to make sense of it anyway.

Richard Dennis’ book Big: The Role of the State in the Modern Economy can be ordered here

The Policy Forum podcast episode on women and social security

Want to help us return to parliament? Donate to our election campaign!