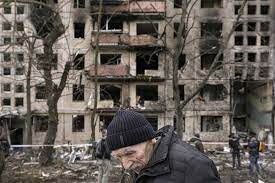 The appalling crimes against humanity by Russia in Ukraine call for every available sanction Australia can muster.

It beggars belief that the Foreign Minister, Marise Payne is still holding off on Russian diplomat expulsion as the executions, rape, and other atrocities continue. The time for any soft, ‘live option’ diplomacy is not now.

Having ‘direct lines of communication with the Russian government’ isn’t working.

The US and EU have expelled more than 325 Russian diplomats and embassy workers and Australia should do likewise.

Ukraine’s Embassy to Australia Chargé d`Affaires Volodymyr Shalkivskyi called for all possible avenues to be pursued to apply pressure against Russia. He told the Press Club:

Having my parents in a bomb shelter — it makes you more decisive, so, yes, I will appreciate any kind of push from the Australian government that is possible in order to deliver the messages.

~5,000 temporary visas have so far been issued to Ukraine refugees. They will be safer if Russian diplomats and their operatives have left the country. There is no word yet as to whether these Ukraine citizens will be offered Centrelink payments.

See here for the sanctions so far imposed.